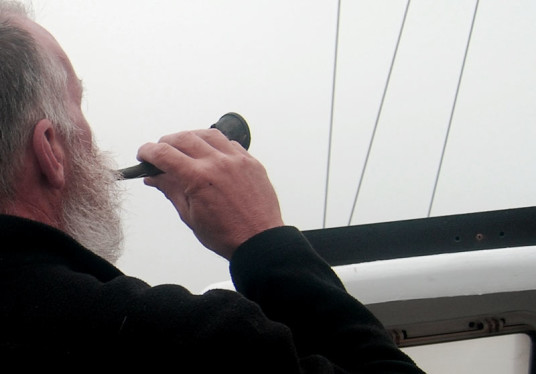 Currents run about an hour and a half behind tides in the Piscataqua River and its side creeks and channels. In order to leave before the current turned against us, we got up at 0400 and had the engine running at 0535. Since leaving entailed dropping the mooring pennant (thanks again, Tom and Amy!), we were quickly underway.

There was a good fog going on, giving us visibility of about a mile or so, but the forecasters called for 5-10 knots of SE wind, building to 10-15 with 20 knot gusts in the afternoon. Perfect conditions for a broad reach up to Portland. We thought it would blow the fog away before long.

Both they and we were wrong.

When we rounded Gerrish Island, at the mouth of the river, the fog got denser rather than lighter. 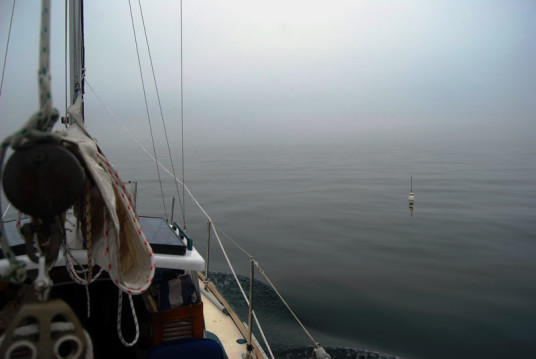 At less than a quarter mile visibility, the term socked in was fully realized. In fog this thick, being on watch means constantly scanning the liminal horizon. With our radar pulsing through the visual barrier, we watched red blobs coalesce on the screen and navigated around most of the lobstering fleet without ever catching sight of them.

Eyes straining in the diffuse glare, ears pointed to the low growl of engine noise reflecting off the water, an hour watch exhausted our concentration. 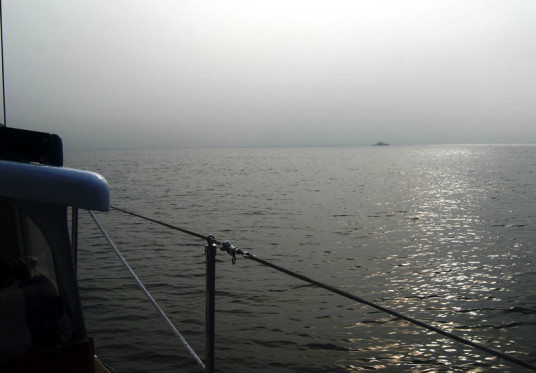 Modulating fog density gave us up to a half mile visibility at times before closing in on us again. The freedom to look farther reminded me (Dena) of the sensation when coming out of a dense forest onto an ocean cliff. Extending focus is a liberating act.

Hours upon hours stacked up, watch on watch, but the fog didn’t lift and the forecasters were wrong. We motorsailed as soon as a breeze plucked at the water vapor in the air around us, but it never got up enough gumption to power us on its own. 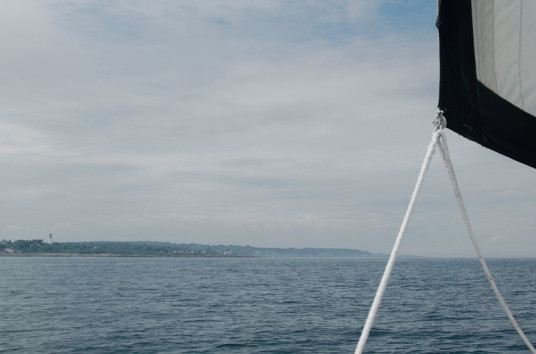 Cape Elizabeth sliced through the fog and visibility increased to a couple miles. A slight increase in the wind tantalized us, but we saw a deadening rain bearing down from abaft.

Just before it hit, the engine RPMs sagged. Both of us being hyper aware of that particular system right now, we jolted alert at the sound. It happened again. Just a slight modulation in RPMs.

The irregularity worsened, so I (James) checked the fuel level, even though our engine-hour calculations put us well above empty. When I pulled the fiberglass dip stick out of the tank, I was completely deflated. Out of fuel.

Less than an inch of fuel means that every time the boat pitches, it pulls air into the fuel line. Diesels cannot function with air in the system whatsoever.

It was time to put up the main sail. As it rose, the RPMs fell for the last time and the engine chugged into silence.

Silence because the wind died and the rain began to fall.

The current pushed us out of the channel toward the red “8” whistle buoy at Pine Tree Ledge just around Cape Elizabeth. The wind flickered and failed, then flickered again.

A sailboat under power came up behind us as the wind built a touch. They came within shouting distance and I (Dena) hollered at them. It doesn’t matter what I said, because they couldn’t hear or understand me. I moved to a more efficient means of communication – sign language. My hands flew, shaping the yellow diesel fuel cans that lined their side deck, then pointed at them, then making a pouring motion, then pointing at myself.

As they neared, I set up fenders while James hove to. Their captain had a better idea, and approached our trailing dinghy instead of bringing two large vessels that close in ocean rollers.  They pulled up next to the dinghy as we came to a stop, with nothing moving us except the current (still pushing us toward the red 8).

The whistle on the buoy got louder and louder as they maneuvered into position to drop the jerry can into our dinghy. Our limited communication at this point, yelling boat to boat, illuminated us to the fact that these were French-Canadian sailors.

They were thrilled to help, and I hope they knew that we would do everything we could to return the gift. We got their destination from them and let them know that we’d track them down.

Saved by a boat named ‘Ohana. Hawaiian for family. Aloha.

I pulled the dinghy up to the boat and retrieved 5 gallons of diesel. Ample for the short trip into Portland.

I took the helm and James added the fuel. As he wrestled with the can on a moving deck (I know, we keep saying that, but don’t forget), I focused on squeezing the largest amount of control from the wind. Speed is all well and good, but first, a sailor needs enough steerageway for the boat to respond to the turning of the rudder. Even though it didn’t take us away from the red whistle buoy (louder and louder), I went to a close reach. That was the most stable point of sail in the light and variable wind. Once I had a little water flowing over the rudder, I brought us onto a course that took us farther out of the shipping channel and away from all hard things.

We tried to start the engine.  Sure enough, we had sucked enough air into the fuel lines that we knew we’d have to bleed it. This is the point where we each internally cursed our decision to keep running the engine rather than turning it off as soon as it showed signs of fuel starvation. We were coming around a point into a major harbor without significant wind and we wanted the control the engine gave us. Instead, we killed the engine in a way that a simple fuel-up couldn’t fix.

So of course I (James) tore into the engine compartment. We’ve talked about this many times as our infernal combustion engine story has progressed, but this entails a four-piece act of deconstruction. First, all of our underway quick-grab tools, flares, flashlight, chartbooks, charts etc are in that area and have to be moved. Second, the steps come off, limiting access to the cockpit right out of the gate. Third, the top (or shelf that holds the crap listed above) comes straight up, out, and is leaned somewhere down below. Hopefully someplace where it won’t bob back and forth or block access to tools or parts we’ll need later. It’s a big piece of equipment and weighs about fifteen pounds. Fourth and finally, the face that has our fire extinguisher and the regulation placards levers out and pulls away. It’s even bigger, heavier, and more in the way.

I looked in and, sure enough, it’s a left-handed project. Or at least most of it. So we switched places, also a big deal because you have to make the leap from below to the cockpit without the assistance of a ladder.  Remember, that went second.

I (Dena) made the reverse leap down into the cabin. I pulled out the service manual for the engine and our venerated copy of Calder’s Boatowner’s Electrical and Mechanical Handbook. The bible. I retrieved our socket set, wrenches, and enough fuel-absorbent padding to sop up whatever came out as we bled the system.

Step by step, I went through the fuel system. Getting to the bottom of a fuel tank usually clogs the primary filter, because any muck that settled to the bottom of the tank has now been pulled into the system. Thankfully, that checked out – no muck, filter still usable. Next, I cracked the bleeder bolt on top of the secondary fuel filter and jogged the manual lever on the low-pressure fuel pump. Bursts of air escaped, then frothy red diesel, then a solid stream of fuel – my signal to tighten the bleeder bolt.

I decompressed the engine, James ran the starter, I threw the compression lever, but the engine didn’t start.

The fuel injection pump was the next piece in the bleeding process, but I fell victim to the Arawak effect. My left-handed brain literally didn’t see the banjo bolt that needed to be cracked to bleed it. I decided to try skipping that and cracked the injector bolt instead. With James spinning the starter again, nothing came out where we should have had pulses of fuel. Very bad news.

It was time to switch places.

I (James) was happy to give the helm to Dena. I had been struggling keeping the sails full in light and variable winds, trying to steer us away from the new downcurrent, downwind, clanging red “2” bell buoy at Witch Rock.

I hopped down below and went through the drawings in Calder’s book, grabbed a wrench, and went right for the one that Dena couldn’t see. I cracked the bleeder, pumped with my left hand, foam, then a steady stream came out, closed the bleeder. I pulled the compression levers up, signaled to Dena to hit the starter button, let the engine spin the pumps for a few seconds, threw the levers back down, and the engine started right up.

As Calder anticipated, the injector bolt that Dena had cracked open was producing a consistent, pulsing fuel leak, behind the spinning belts and pulleys, deep into the sonic distortion of the running engine. I grabbed the right wrench (this never fucking happens), tightened the bolt, and the leak stopped.

We froze and listened as the engine smoothed out and we began to think we could trust it to pull us off the breaker-making rocks at Ram Island Ledge.

At a gentle pace, we motorsailed between Cushing Island and South Portland. Our first stop was the first fuel dock we came to. With a full tank on the boat and a refilled jerry can for the crew of ‘Ohana, we anchored just before the fog closed back in. 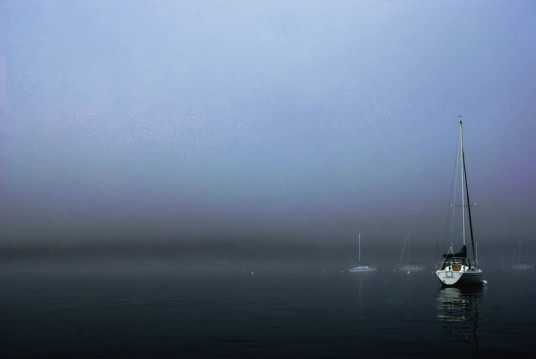 Back to our old haunt off the East Promenade.

The end of what, in yesterday’s post, we called a slow-motion calamity.

After a giant, decadent pasta and a good night’s sleep, we woke to a continuation of the fog. 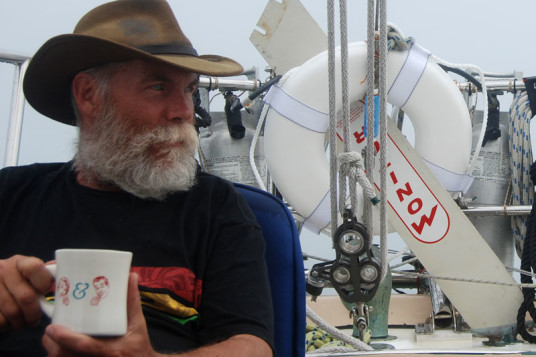 And you know what? That’s fine. That’s just fine. 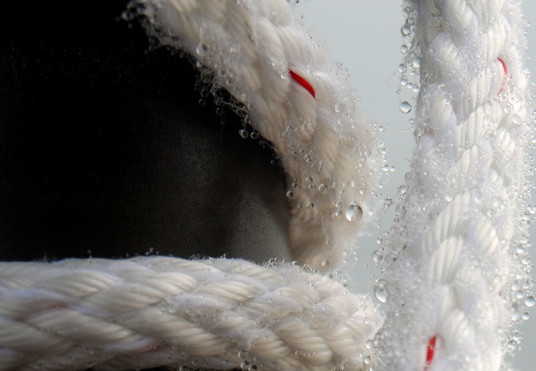