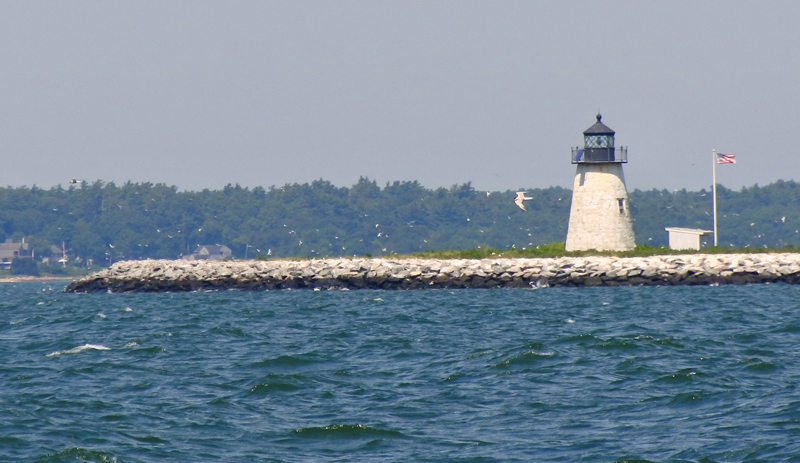 Our volte-face in the Chesapeake was an awesome call. We went sailing and Deale, Maryland, was were we gunkholed, then bounced on to the Magothy River the following day to survey for the Guide.

We had our sights set on an offshore adventure so it was overnight stays only for the rest of the Chesapeake Bay. After just a single terrifying summer-squall, cool breezes and perfect sunsets were all we got north of Button Beach.

After one more perfect shallow Chesapeake gunkhole at the mouth of the Bohemia River, it was Chesapeake City for the last of the Kate-sustenance.

We didn’t even stay overnight, though. A few hours after sunset we moved out on an almost-fair current into the C&D Canal. A laying-on of hands was required and James provided it, after the middle cylinder’s decompression level somehow levitated far enough to make the engine run like shit. We met the middle of the night sailing the Delaware Bay and watched the Neowise comet blaze into the northern horizon.

Cape May is always the perfect place to get some projects out of the way before an offshore leap, this time to Newport, RI.

And then we went sailing! It wasn’t quite the first use of the Monitor, but close, and the system was not quite perfect.

As a matter of fact, the roughness disintegrated the rusted, aging latch on the paddle as we were making our big-seas approach to Newport Harbor. On a Sunday. In summer.

Why were we going there?

Oh right. We’d ordered the supplies for getting the watermaker working and would do an epic walk in order to pick those up. And since we were already hoofing it, may as well swing by Newport Nautical and get a couple perfect used cheek blocks to replace the Antal rings that didn’t quite do the job for the Monitor.

A dude in front of us at the local hardware store gave us the idea for a temporary fix (above) and it got us all the way to Onset, Mass, where we are today.

With the watermaker cruising kit delivered, the groceries stowed, the Kraken in the freezer and the weekend looming again, we couldn’t wait to weigh anchor.

We decided to spend a couple of days on a shagged mooring in Potter Cove again just like we did two years ago when we came through. The water was nice and warm and it was a beautiful night in the anchorage.

A challenging, enjoyable sail took us from Prudence Island to the Hog Island Shoal Light.

It was a 3-lighthouse day, and then we anchored as far from Sachuest’s (Third Beach’s) weekend crowd as we could while still getting some protection from the point.

Another short stay, another short trip, this time to Cuttyhunk. The waves weren’t all that comfortable, partly because there wasn’t quite enough wind to allow the sails to steady the ride. On the other hand, it was a day spent sailing, so we were well satisfied that we’d earned the gorgeous sunset.

We anchored well ahead of another boat, which promptly hauled anchor and moved farther toward land. Either they didn’t trust us or they were trying to get more protection from the forecasted 35-knot winds.

As a matter of fact, the entire experience was tainted…flavored?…definitely characterized by a near-dozen boaters who showed up only to show their asses. Folks dragging their anchors all over the place, hauling them up, clearing the weeds, trying again…to no good effect. Others (yes, plural) who let their genoas flog while preparing to roll them in, thereby tangling their genoa sheets so badly they couldn’t get the sail in or down or full.

But the worst…the absolute pinnacle of vicarious trauma…was the spindly grey-haired couple. They passed the red nun buoy marking Pease Ledge. He went forward to drop the main. She turned into the wind. He struggled for some time…

We were in our cockpit, watching casually and then not so casually. Don’t they know? Are they really…no, they’re turning away…wait, don’t turn back!!!

Our chartplotter was still on and their boat showed up on radar clear as could be. We watched in the real world while they drove slowly closer to the rock ledge and on the screen, their red fuzzy blob closed the distance to the green that denotes something that is covered at high tide and uncovered at low…

And then a sickening, deepthunking crunch matched the sudden cessation of forward movement and we knew that yes, they had hit the rocks. The wind should have pushed them off, but they spun in place first, either hard on the rock or still in forward gear, before finally coming loose and heading directly for the protection of the inner harbor.

We don’t know what happened to them from there, but they would have had plenty of help if the water was pouring in from a brand-new hole in the hull.

The next day we sailed up Buzzard’s Bay and then motored up the Wareham River. They have a retail weed store right across from a free dock, and a grocery store a mile away. Score!

But it was way too hot upriver and we left a little earlier than we’d planned. It was a short trip to Onset, and now we’re more-or-less at peace, safely at anchor, thoroughly at home.