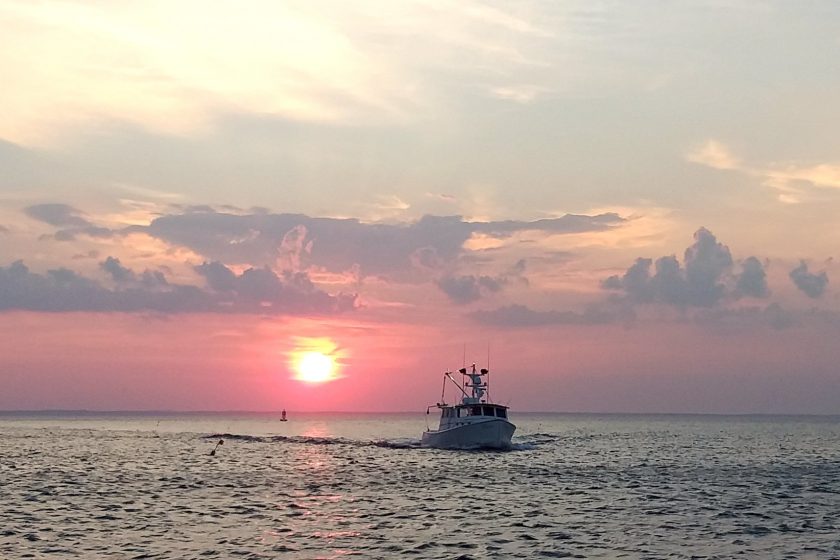 This time, it was fog. A thick mess had us sitting tight until it lightened to about a quarter-mile visibility. We didn’t have anything to do, really, except raise the anchor (all 200′ in 30′ of water), so it was a patience game. Finally, we agreed that it was dissipating and we set off.

The thinning reversed as we approached the breakwater, though.

By the time we were well outside the harbor, we were swaddled like babies…hungry, angry babies. I (Dena) sounded the horn anytime a radar return or engine noise encroached on us and James wove between suspected lobstering or fishing boats. Like I (James) do.

Lobster buoys appeared in the mist and, once we realized they weren’t distant boats, were useful for calibrating distances. It’s not easy without a horizon.

I (Dena) took over on the hour (shift kiss!) and worked to do three things. 1) Stay on course, meaning watching the chartplotter. There wasn’t a single visual cue in sight. 2) Interpret the radar splotches and weave between invisible boats. 3) Get my (fucking) head out of the cockpit!

The hardest one by far was 3. When the visual field gives you nothing and instruments do, that makes sense. Not all boats show up well on radar, though, and there was always the danger that I could come upon a low-sided wooden vessel from which an invisible person fished quietly…

And then the fog lifted. Well, more properly, we left the Cape Ann weird-shit zone and entered open Atlantic waters.

The wind began to drive us along better and better until we threaded our way between the Isles.

The Isles of Shoals sound much scarier than we found them to be. There is no doubt that these rocky outgrowths of deep water would have been startling at best and tragic at worst for the sailors of another era, but clear weather, our charts, our electronics, our tech, meaning, our phones and that ultimate bastion of civilization – the lighthouse – made us confident.

It’s the kind of place with bad anchor holding and extreme depths right up to land that ends up being filled with moorings. These are for the taking, with the caveat that the owner has dibs, so we took one that put us upwind of the inevitable generator fumes (our neighbor boats had no solar or wind what-so-ever).

The next morning dawned a hot red with a cool breeze.

…And off we went on another adventure.