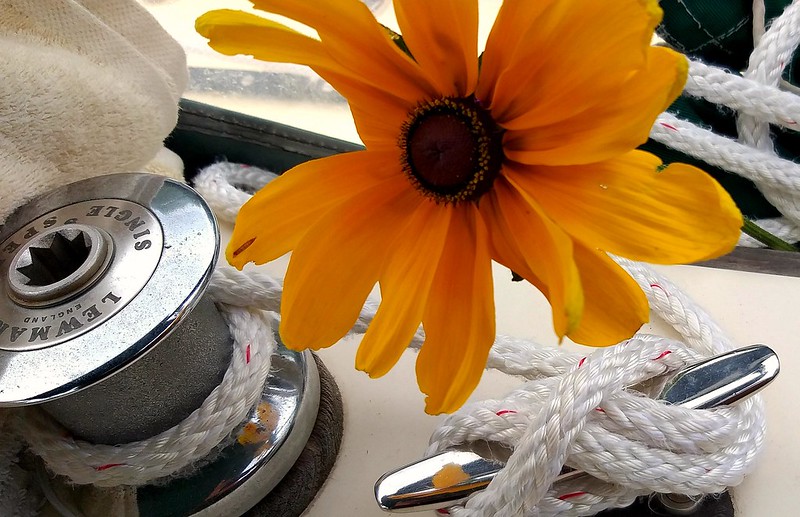 One of the best things about being a reader of bloggy things is you don’t have to live through the doldrums!

We motored from the Isles of Shoals in New Hampshire to Cliff Island, Maine…and I (James) so wish it had taken as long to do as it took you to read just now.

I don’t even know how many times on this blog I have said, “Sailboats motor like shit. That’s why they’re called sailboats.”

Maybe never, maybe a thousand times, but guess what?!… We live on a sailboat!

When we rounded Cape Elizabeth, I texted my friend Michael to let him know we were in the neighborhood and he launched with his brother and Sky (bro’s BFF) to meet us at Jewel Island, our pointed-to anchorage for the night.

Because this is the sailor’s life, we ended up on Cliff Island instead. No room at the inn at Cocktail Cove.

No skin off my nose (me being Dena), since it gave us the opportunity to try a place we’d never…quite…been. We’d been in a different little scallop in the shore, but spring is intense here.

Michael and fam arrived and we rafted (What?!? Yes! That’s how much we like Michael!) and then James and Michael went to get Ashley and…

I (Dena) watched James leave with a gentle bewilderment. Barring bathroom trips, how long had it been since we’d really been apart?

Kate came to Chesapeake City on July 13th and we wandered off together. She and I came back with groceries and liquor, and James and I hadn’t been apart for more than a couple minutes since then.

So yeah. It had been a month and also a perfect eternity! Without wage-slavery, our apart times had been all fairly short all the way back to 3 Mile Harbor and a year ago.

Luckily for me, I felt safely anchored and enjoyed the company of Jay and Skye. We had a good time finding common ground and feeling out the cliff-edges where we weren’t in tune. When Michael zipped back into the cove with his 21′ center console and his Yamaha 150, he had James, Ashley and a huge stack of pizza aboard and all was well in the world.

We didn’t want to stop moving but a supply run was in order, so we aimed for Bath, Maine. That meant going up the Kennebec River, a joy and challenge of its own.

The river is not something we wanted to fight, so we anchored outside waiting for a fair current. We ate little salmon cakes made up like falafel with hummus, greek yogurt with zatar, lettuce, cucumber, and tomato all wrapped in pita. Delicious!

The water was so clear that I swam (for the first time in 21 years!) down the chain to the anchor so I could see what it was doing on the bottom. I wore my racing style swimming goggles and beheld our CQR anchor laying on its side. One fluke was well out of sight, buried in sand, but the other lay in clear water. A good pull on the chain would have evened it up, but the insecurity vexed me until we hauled that fucker up and left.

Seguin Island stayed in the distance. As much as we’ve enjoyed ourselves there, we got bit last time and maybe felt a little sore still.

Pond Island Light welcomed us to the Kennebec River and the current was nearly still. We’d done a good job of timing the wait.

Shallow water connects Wood Island to the whole Popham Beach area. Even seeing it on the chart doesn’t make it less weird when people are wading in what looks like the middle of the ocean.

I (Dena) became a bird-enjoyer only after becoming a sailor, but now I’m amazed and filled with gratitude at the amount of time I spend watching these animals live their lives. Cormorants surfacing, osprey diving, and the whole array of little warbling birds that visit…and the rockstar, the loon. The Kennebec shares with the Chesapeake a omnipresent osprey population.

I waited for the most beautiful moment to shoot this lovely inlet. Honestly, though, every moment was beautiful.

The Kennebec does some winding in the most hypnotic way through these green hills and most points are marked with lighthouses. Squirrel Point Light was visible for so long that we took dozens of shots, but this one has context. This is what you would have seen if you’d been with us!

And again with the birds. James spotted the eagle and I wasn’t sure but yep.

The lights aren’t there for their aesthetic appeal, of course, but range lights and lighthouses alike are made to fit their environment. The New England seriousness of them and the little whimsical touches, the impeccably maintained paint jobs and the heavy hand of the cold waters…these are compelling sights and they are everywhere we go.

It was a lazy glide up the river with that fair current and we landed on the dock in Bath with plenty of time to enjoy a beautiful Friday night right smack in the middle of everything!