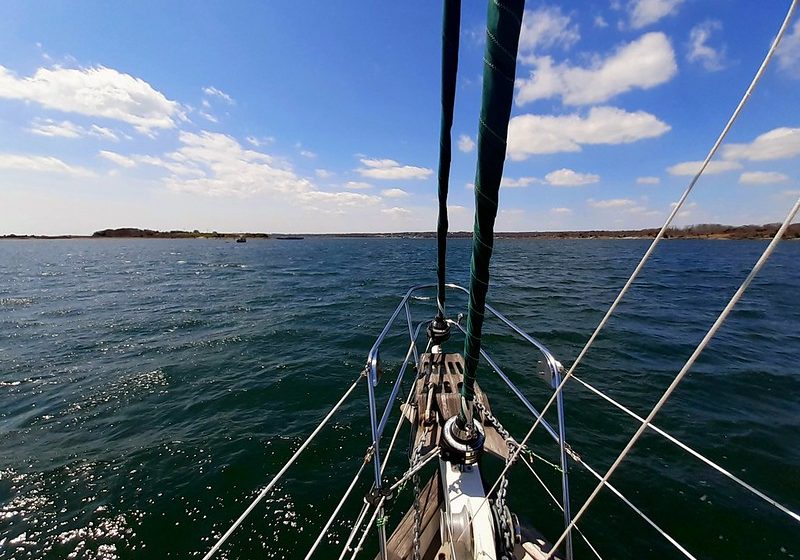 I (Dena) woke at four in the morning and spent an hour and a half pondering dread. It’s not an emotion I spend a lot of time with, but I’ve learned that I ignore it at my peril.

We’re anchored in Dutch Harbor, Rhode Island, and we are in the middle of nowhere.

The town has filled the good space with hundreds of moorings (I’m not the broken record; they’re the broken record!) and the only place to put the hook down is about halfway between Dutch Island (abandoned but fun to visit in warmer weather) and the much-larger Conanicut Island.

We provisioned up at the local supermarket, which is a social-distancing nightmare of narrow aisles and cul-de-sacs.

We weren’t even allowed to fill our backpacks in the store because of temporary rules against reusable bags. The cashier got halfway through before having the excellent idea of just putting the items back in our carriage (as she called it) rather than into plastic that we would just get rid of.

It can get pretty rough in here, not a lot of protection, and this has been a windy, gusty month on the boat. This was going to be a stop on the way, inching ourselves along the Long Island Sound and toward the Chesapeake, because the weather…wow. Cold, contrary winds and rain every time that changes.

We’ve been talking about bouncing to a more-protected spot like Old Saybrook. If it stays stinky weather-wise, at least there’s a grocery store within walking distance. It’s a fairly small basin and so doesn’t build truly fierce fetch like it does here in the Narragansett. But the main reason it felt like a no-brainer is that it’s progress…motion toward the places we plan to be going.

So why did I wake at four in the morning with a mild but demanding sense of dread?

Because we don’t have to go anywhere. Because today is a Bad Day and tonight will be a Bad Night with Rain and tomorrow is a Worse Day by Far. Because getting to Old Saybrook means navigating gusts to 30 knots into a rough anchorage and then a ten-hour day in the cold and rain with more 30 knot gusts. Because there’s some chance of getting hassled or even evicted from Connecticut due to the wide-spread fear of Covid-19 transmission…and the same chance in New York and in New Jersey.

Destination fixation warning light. That’s what dread so frequently communicates to me.

We’ve already been in Rhode Island past the required quarantine period, so we are not worried about being either forcibly quarantined or required to leave. This anchorage is fine, if rough, for the Bad Day and Night and Day (or maybe just Morning if the rain clears tomorrow afternoon). There’s no overwhelming safety reason to get underway today, so…

I (James) remember a time (September 2001) when I too woke in the middle of the night and listened to the wind howl through the rig and was overcome with a sense of complete dread, not fear, as much as absolute doubt.

When we talked about it the next day we were both relieved to find out that our feelings were mutual.

I’m not talking about superstition and I’m definitely not talking about some special abilities on our part, I’m just talking about a feeling is all. A profound feeling that is now, after over 20 years of cruising, recognizable and easy to fix by staying right where we are until we’re damn good-n-ready to carry on.