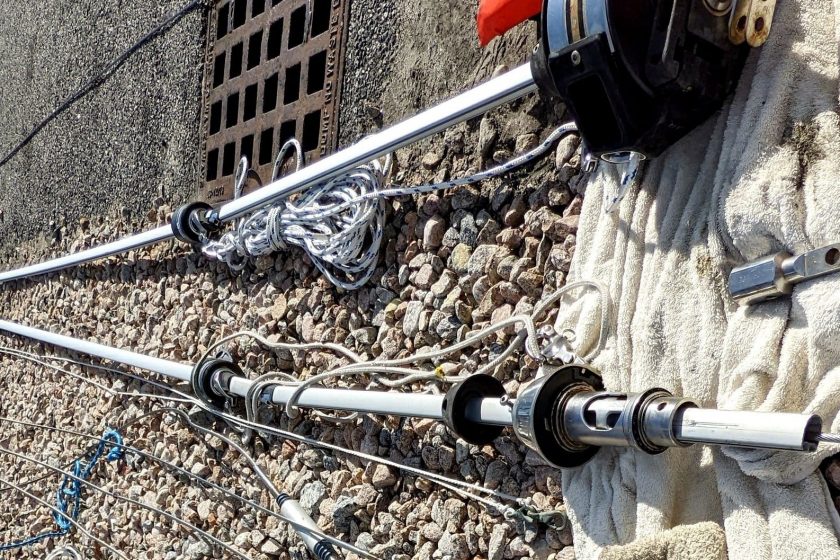 On Monday, nice and early, we pulled into the empty slip almost directly in front of the crane. A salty long-haired guy caught the bow line and somehow managed to help us into the slip without being irritating. (Usually we refuse all assistance.)

He seemed surprised to see us, an impression made stronger when a workboat towed a mastless cat boat into the same (rather large) slip we were in. They angled us as deep in as they could and pulled that cat boat very close behind in order to put their mast in before they pulled ours out.

Now, I don’t want to go on and on about this, but I’m pretty sure that the guy from the office (who incidentally also operated the crane) forgot us…or didn’t believe we would actually arrive…or who knows what. After all our prep, it was a mighty relief to have that same guy who met us at the slip start talking about how he would go about pulling our mast.

And away it went. Then we took Cetacea and Beluga Greyfinger back out on the hook.

And thus it began. A project almost four years in the making.

We spent the first day taking everything apart that we could and walking endless inspection circles around the mast. We pulled the masthead fitting and all the rigging and laid them aside as gently as possible while touching and inspecting every single fitting as much as we could. The yankee foil looked like a broken marionette so we slowly and ever so meticulously took the entire furler system apart, piece by tiny confusing piece, laying it out on on the gravel pit that was our work bench.

Our roller furling systems (above) are some seriously smart-monkey shit, and I do mean put together like a puzzle not actually intended to be worked on by end-users. So of course we dove into that shit like it was a pool.

We got it to a sticking point – literally – and then had to stop. We needed to force the collar of the Sta-Lok fitting back up the wire of the stay, but it was not going to come lose without the heat gun and the hammer. Celebratory Mexican food was in order!

James’s bike made a horrible sound only a few pedals into the trip and, sure enough, his bottom bracket bearing had gone to pieces. The grinding, clicking, popping bike ride was short and worth it – we left the restaurant full and ready to focus our minds on the next day’s work.

I James had some of the craziest dreams that night (image below multiplied by one-million). The boat moves so strangely without a mast and we were so strung out on the project ultimately it was a restless night.

There are so many pieces that interlock in very specific ways that we ended up reading the manual and watching the (not that enlightening) youtube vids over and over again before we pulled the whole thing apart on day 2. There’s always something missing in these videos, some detail out of view or accidentally-on-purpose cut from the final. Something the maker considers obvious, perhaps. Comparing the manual to the installation videos, we thought we had it pretty well figured out.

The first challenge was overcome rapidly with the heat gun and hammer. Then we teased apart the wires and pulled the wedge out, then put the whole Sta-Lok fitting back together so we couldn’t lose any pieces.

We pulled the wire out, just like we’d been instructed, but the innards didn’t come out with the wire like we’d been assured they would. Because the instructions had skipped a step – leaving the wedge snugged in the end of the wire.

After some judicious cussing and walking long winding figure-eights alongside our (now tragically) wonkily connected foils, we hatched a plan to push those innards out. It meant riding our bikes to the hardware store (which, along with the marine consignment shop, were the main reasons we thought Wickford a good place for this sort of project). James’s broken-ass bike made it a slow ride, but the store had what we needed – two 6′ lengths of all-thread, a connector, and a couple of nuts to provide the push.

That turned out to be the Whizbang Gizmo that let us push the innards down so that we could disconnect each foil section from the one below it, working down one at a time until the whole thing lay in pieces before us.

We worked on that furling system pretty much all day and, with more careful use of the hammer on the bent (yay for not broken after all!) connecting pins, finally got the entire thing properly back together a nice long time before sundown.