On a Friday, we sailed from Bristol, RI, to Sachuest, RI, off Third Beach and we swam to the beach and had a lovely walk and an ice cream cone. 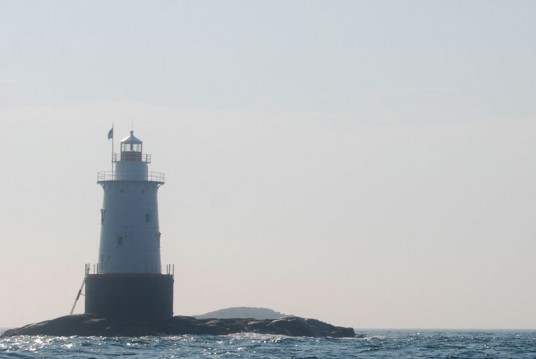 On a Saturday, we sailed from Sachuest to Clarks Cove, MA (rocked, we were all alone, how’s that happen?) outside South Dartmouth on opening day and there were only a-ga-gillion boats parading outside New Bedford for “The Blessing of the Fleet”, yuk…

And then on a Sunday and the very special day of patriotic displays of explosive power, we sailed from Clarks Cove to Onset, MA, on Cape Cod.  Anchoring far from the masses, we rowed into town for a pizza and bread and eggs and soda.  When we started our row into town, we had absolutely no idea that the 4th of July would be celebrated on the 7th of July in Onset, Mass.  The beaches were packed with patchy white charred flesh and drenched in cocoa butter.  Torquemada’s dungeon could not have reverberated with as many screams as the children of Onset ripped loose as they freaked the fuck out in the water.

Making a quick escape, we rowed back to the boat with groceries at our feet, just in time for a truly delightful fireworks display.  We’ve been bombarded by fireworks that were just a little bit too far away all week long.  Then to be in a nice quiet anchorage, almost by ourselves, and to have a perfect, close experience overwhelmed us with an appreciation that usually gets lost in the cost-benefit analysis and jokes about vestigial displays of military force.  In other words, we had a great time.  We leaned against each other and held hands and it was awesome.

Thanks, Kate, for softening us up for that.

The next day, we walked.

I mean, we really fucking walked.  We walked 2 miles to a bus stop that took us 8 miles to a movie mall in the middle of nowhere, where we sat for 2 1/2 hours eating popcorn and gratuitous violence.

The next bus wouldn’t come for about 2 hours, and we looked left.  Looked right.  Saw nothing.

So we walked the 9 miles directly back through some of the most beautiful landscape that Mass has to offer.  We talked nonstop.  We walked softly but quickly, at a pace we both enjoyed.  Halfway back, we stopped at a bar in Wareham (not pronounced the way you’d think, but I can’t mimic it at all), where we had some tap lemonade and conversation with a Manhattan born Asian-Jewish bartender.  She was hot.

By the time we reached Onset again, a need for the bathroom provided the perfect excuse for some ice cream.  That blasted us through the row back to the boat, after which we collapsed…no wait.  There was that other thing.

Shipping the dinghy means attaching a line that runs halfway up the mast and through a block (it’s called the whisker pole topping lift) and hauling Tinker over the lifelines, then lowering her onto the chocks that keep her in place on the foredeck.  This time, we inadvertently wrapped the line around the forward lower stay, which pulled the line off the block when the dinghy was half-way up, then tore the line and jammed it into the block, very efficiently breaking the block into pieces, but also stranding Tinker with her bow above our heads and her stern just over the toerail.

We’re too fucking tired for this.

But no, we’re superheroes and we dealt with it.  We muscled Tinker over the lifelines, onto the deck, flipped her over and put her in place…without our lifting tackle.  We tied off the line and said, “Yes – we’ll fix this tomorrow.”

Next morning, coffee ritual done.  I (James) go aloft and attempt to take the old block and tackle system down.  The twisted ring shackle that was holding the broken block in place was so corroded that it bent my marlinspike on my Myerchin knife.  You have to know that this is a really big deal!  These knives are made out of tempered steel by craftsmen.  They are guaranteed for life because bending or breaking them never happens.  Well, I managed it trying to get the block off the mast, 25 feet off the water.

No problem.  I broke the shackle.

Dena passed me up a couple of new shackles and I whipped the new Garhauer block into place, then reeved the new line through the block.  Project done. 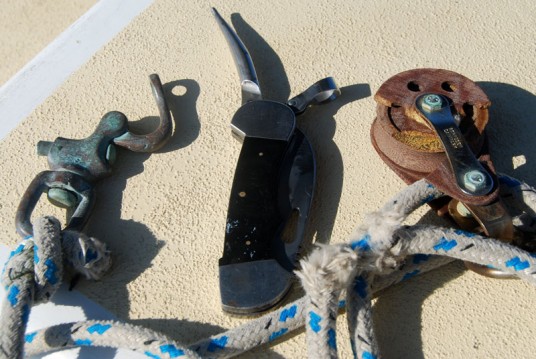 We’re getting really good at taking care of each thing as it comes up.

Actually, sailing in the Cape Cod Canal is forbidden by the powers that be (aka the Army Corp of Engineers), therefore, we motored.  It took almost an hour to run the 7 miles.  The scenery rocked. 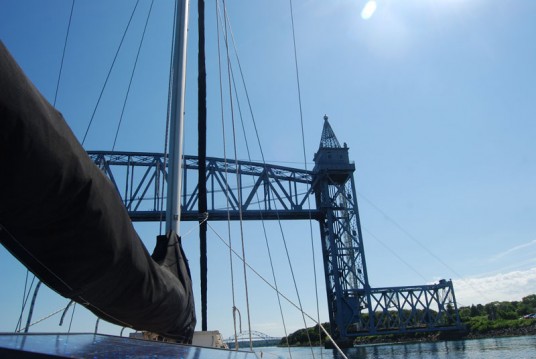 This is the 200th anniversary of the War of 1812, and a whole mess of Tall Ships have been making their way up the coast along with us.  Just behind us, for the most part.  Today, two of them blew right past us in the canal, creating a perfect photo op. 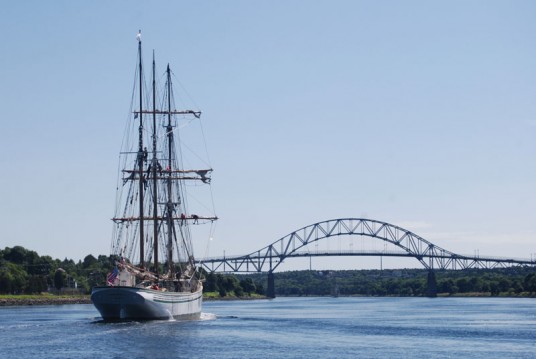 Just past the last red buoy, we hung a left, hoisted sail, and beat feet (or keel) to Plymouth, Mass.  Or rather, Duxbury Cove.  We’ve realized that, when we’re not planning to go into town, we should avoid areas full of mooring balls and assholes.  We put the hook down, smack dab in the middle of the bay, and it is awesome. 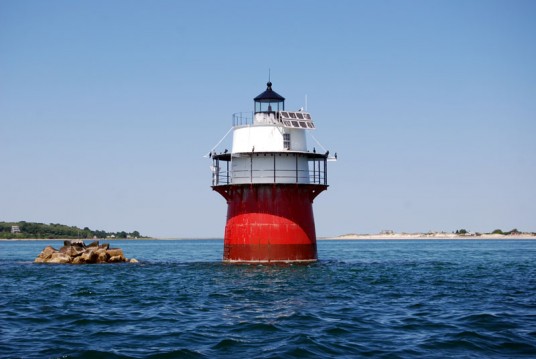 With an early start in the morning, we should make Salem by tomorrow evening.  But hey, there’s no hurry, right?