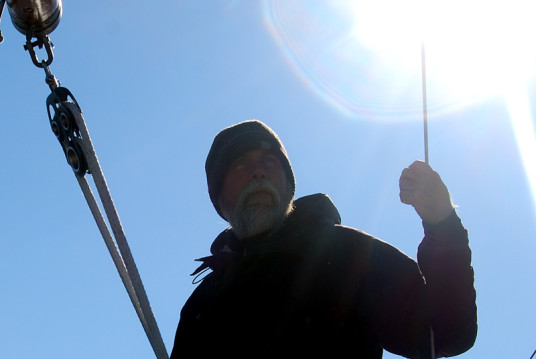 October 25th marked the completion of our 17th year together.  We celebrated in high style – our version.

We got underway from Cold Spring Harbor bright and early, heading around the rocks off Center Island, along the blunt point, down Hempstead Bay to Glen Cove. Once again, we were doing some heavy beating with a foul current for most of the trip.  When we turned down the bay, though, we caught the fair current, broad reaching in 20 knots of wind, with the swell on our quarter.  Fast.

We didn’t make arrangements ahead of time, because of our allergy to firm planning, but it’s just not that hard to get into a marina in late October.  To our disappointment, the Brewer juggernaut has taken over every single marina in Glen Cove – not a single independent left.  Sigh.  Oh, well – we’ll feed the devil this once.

So we pulled in (minor clusterfuck – the office drone told us we’d be port side to, so we put our mooring lines and fenders on the port side, then she waved us in on a starboard side slip and said oops, which necessitated some last minute scrambling to get lines on the correct side).  We did a washdown of the boat and then of ourselves (the first in the six days since using Mom’s hotel room shower in New Haven).

We walked up to Sea Cliff, where the Metropolitan Bistro was just opening up.  Almost three hours later, we left replete with wonderful conversation, loving each other more than ever, well fed and well lubricated.  The waitress gave us the poached pear on the house – it was divine.  It was perfectly us on our day – a long walk after a lot of sailing, holding hands and wandering into the unknown ready to enjoy ourselves.

The next day, we jounced across the sound – a short trip, but extreme.  From the extreme chop to the extreme shallows and the extremely narrow channel into our anchorage at the Lagoon, we arrived after only a few hours, exhausted.  Hook down, we finished the engine but relaxation eluded us.  The wall.  It was too close.  So we hauled the anchor and reset it, deeper in the lagoon.  A testament to our understanding that a job deferred is a job you’ll have to do at 3am under duress and in torrential rains.  We ended up without duress or rain, but they would have occurred had we not moved!

When we first started out on this trip, from New London, checking the weather and tidal conditions, we realized that, for most of the trip, we would have a foul current and a foul wind.  We endured these conditions with the knowledge that we were going to enjoy our anchorages more than our sailing this time.  That’s how it turned out, but it’s not so bad when it’s expected.  We kept the sailing days short and the anchorages cozy, and we enjoyed the hell out of the trip.

So, the Lagoon.  New Rochelle has Glen Island (a park), Hog Island (a rock), Hunter Island (a neck), and a general anchorage between them that is known as the Lagoon, or the Rowing Lagoon.  The hoity toity (strict dress code-having) New York Athletic Club runs sculling boats through there from early in the morning until very late at night.  They’re very serious about their lock-step form of water aerobics.

Anyway.  There’s plenty of depth (once past the scary scary channel) and decent holding.  Best of all, it’s well protected from wind and waves.  Better than best, it’s free!

We rowed the little boat to the public dock at Glen Island. No signs informed us it wasn’t a free public dock, and the dinghy didn’t disappear while we were gone. From there, we went and discovered the town of New Rochelle.  There’s a Taco Bell and some houses and a library that’s open on Sunday!  There’s even a municipal marina that is one of the nicer armpits I’ve seen.  We got some groceries on the way back.

This was the beginning of our search for a winter home, and we were not stoked.  New Rochelle – meh.

We were in the Lagoon for three days, enjoying reading and being in a sheltered cove.  But the city beckoned so we set forth upon the final leg of our journey home.

Turns out, we were still twenty-some nautical miles from the Statue of Liberty, behind whose draped ass we planned to anchor.  Between the Lagoon and there, we would do some pretty intense sailing.

Up at 5am, we ground and perked our coffee, hauled anchor, and were underway by 7am.  We carefully motored through the nervewracking channel and then we raised sail just off The Blauzes, a set of rocks between City Island and Hart Island.  We’d gotten up so early in order to have the tide with us throughout our trip.  It was luck that put the wind behind us as well.  We ran under double-reefed main and headed for the Throgs Neck Bridge. 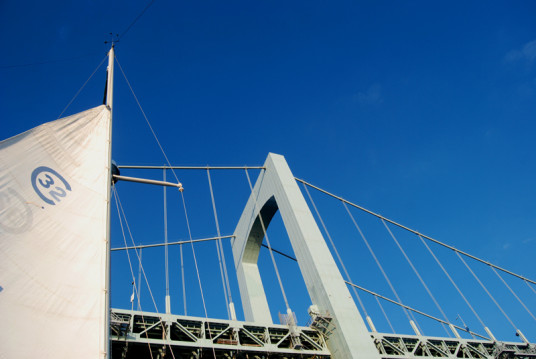 We gybed into the East River and the current immediately kicked us up to six knots with the wind on our starboard quarter.  This trip is always such a sleighride.  The day was beautiful – nice and warm – and we were making great time. 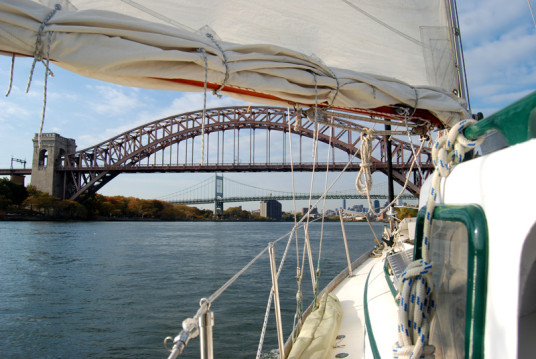 We negotiated Hell Gate sans difficulty, and came up on Roosevelt Island at 9.5 knots.  Though we were moving fast, everything was under control. 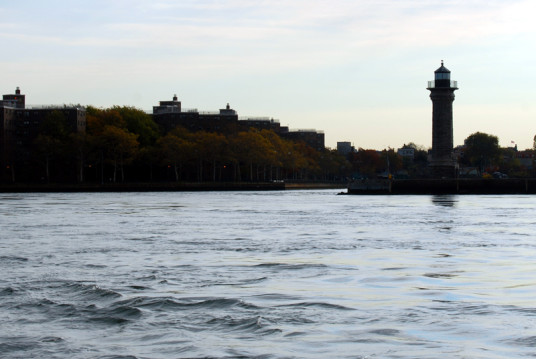 All the way south to the tip of the Battery, we never dropped below 7 knots.  It’s important to remember – our hull speed is 6 knots.  Whew. 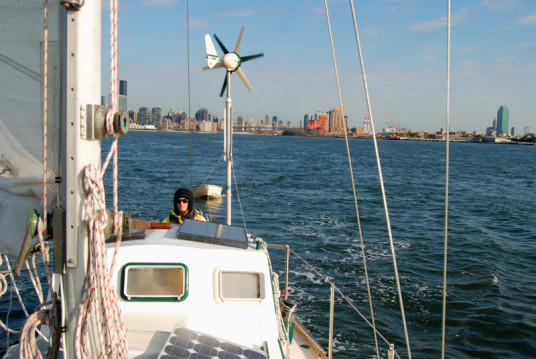 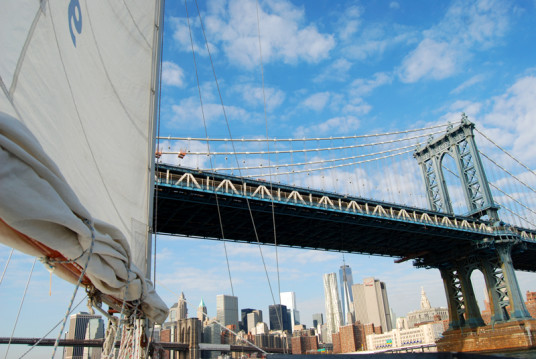 After the Brooklyn Bridge, shit gets weird.  A thousand ferries crossing and tossing us on their wakes, helicopters circling dizzily at maniacal decibel levels, water jumping straight up at the sangam of the East and Hudson rivers and making the dinghy dance on her painter, the sounds and scents of 17 million people and all the industries that grind on around them.

Just when you expect to be flushed out at the feet of Lady Liberty, you realize that you’ve entered New York Harbor, proper.  One of the busiest industrial waterways on the planet.  There are 800 ton barges being pushed by giant tugs, or anchored – can you tell what’s moving or what’s not?  The water is moving at 4 knots – they all look like they’re underway.  Plus the dozens of packed, listing Statue of Liberty tour boats that don’t seem to care if you’re in the way or not.  The tugs herding their charges move in more-or-less predictable directions, but the tour boats head into and out of channels and docks with less warning than a parade in Trivandrum.

Tack on a channel that shrinks to 50 feet wide and 6 feet deep with a 4 knot cross-current and you’ve got an average day in New York Harbor. 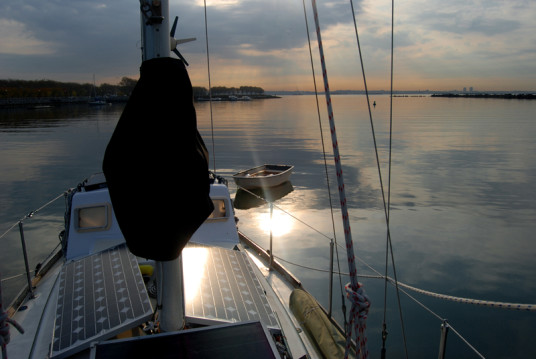 The Liberty Park anchorage is snug.  The holding is great and the neighborhood is quiet.  Relative to the above.  Only the fishing boats roar in and out, but they can be yelled at and, more often than not, they respond. 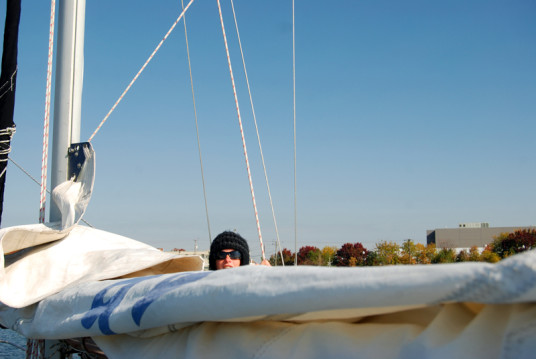 This was part two of our plan for finding a winter home.  New Rochelle was part one because it was along the way, but we’d rather enjoyed the idea of being in a place with more to offer.  “Jersey City” doesn’t have a romantic or exciting ring to it, but it’s actually quite metropolitan in its array of shops, restaurants, and cultural offerings, not to mention the proximity to the City.

In other words, we like it.  It has a good feel to it so far.

At the first marina we checked out, a while back, the guy said straight up that they don’t allow liveaboards during the winter.  We were fussing a bit at the idea of being sneak-aboards again after all this time living openly aboard our boat.  This was a point of stress – was this the attitude we’d receive no matter where we went around here?  Our options are narrowed considerably by the violence of the Hudson River.  We needed a protected spot and the three options in the Morris Canal fit that bill.  Brooklyn marinas are far from Manhattan, and, in classic Long Island fashion, expensive.  Too far up the Hudson and it freezes.  The other side of Queens – back to New Rochelle.

So we had spent some energy (though as little as possible) worrying about where we’d end up wintering.  Rowing into shore, we set off to set our worries aside.

Liberty Landing Marina – the closest to the anchorage – was our first contact on foot.  We walked the long, industrial road between the anchorage and Morris Canal.  It gave us an almost Sopranos perspective of the outskirts of Jersey City.  We now know where to hide the body.

Reaching the marina at gate R, we walked along, letter by letter, toward the big, shiny building.  If we were going to sneak aboard, this was the place to do it.  There are 1200 boats in the marina and each entrance is impossible to monitor from the office area.  When we reached the big building, we roamed inside but couldn’t find the marina office.  Finally, we asked a UPS guy and he pointed.  “It’s in the big red boat.”

We looked at each other and said, “Holy shit!”  “It’s a Lightship!”

Reminder.  We’ve been to every Lightship in the country.  We love Lightships!  Things were looking up.

After a brief conversation during which the Contracts Manager said many times, “Lots of people spend lots of time on their boats,” we got the message.  They don’t give a shit if you live aboard.

She gave us an access keycard and told us to check the place out.  She said the best way to find out how great the marina is would be talking to the marina customers.  “They’ll tell you what’s up.”

The bathrooms.  Nice.  Very nice.  In the women’s, a lady said she lived aboard and they didn’t give a shit.  The power is metered, so why should they?

We signed the contract and headed back to the boat.  One last wonderful night at anchor before going into a slip. 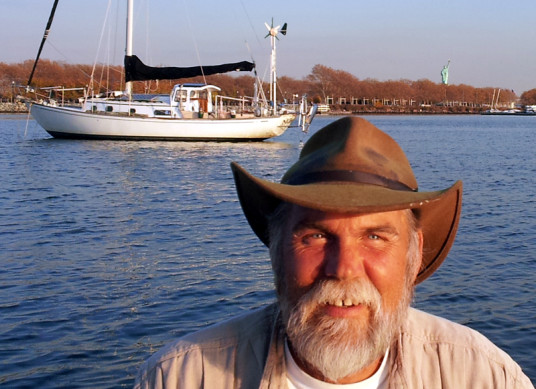 So here we are – Liberty Landing Marina.  Our winter home.  At the end of one adventure and already well into the next. 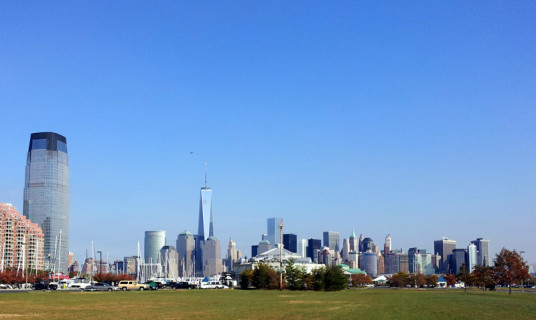