P-Town was a raging success! 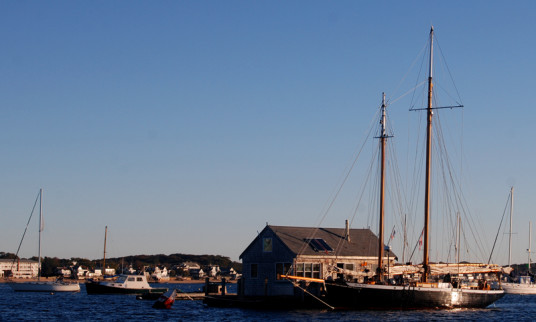 We anchored for the first three days right outside the city breakwater. On the second night, though, we got our little butts spanked by an early winter screamer that clocked around from the south to the northeast with winds ranging from 25 to 35 knots and breaking waves in the 5 to 8 foot range!

Neither one of us slept very well that night as the boat got pounded from all points of the compass (that’s saying a lot ‘cuz Dena can usually sleep through pretty much anything) but our ground tackle held like it always has, perfectly!

Our anchorage was about 2/3 of a mile from the city dinghy-dock. The row was exhausting going in but we quickly discovered that it was almost impossible rowing back out!

The first morning after the big storm I (James) rowed into town. It was long but doable with the wind in our favor. After a full day of running up and down the P-Town drag (about 50 times), out to a grocery store, a liquor store, and the local coffee shop for our sustenance and addictions, we were well on our way to being kaput.

Then, at about 5pm, I (Dena) made my doomed attempt at rowing back out to the boat.  I pulled strongly while between the dock and the breakwater. Then we cleared the protection of that giant pile of rocks. The wind pushed us backward and the blades of the oars were like wings. I twisted my wrist with each stroke so that the edge of the blade presented itself to the wind’s force, and that helped…a little.

On the other hand, waves were breaking over Tinker’s bow and washing over my shoulders. And it was damn cold, even with all the effort. James bailed to keep the boat as light as possible, but he held his computer and mine sat on the drenched seat between us. After about 40 minutes of hard struggle and wave after wave drenching us and every piece of electronics we need, I threw in the towel, turned around, and headed back to town.

Even downwind, I had to manage our angle to the waves carefully. The last thing we wanted was to roll the damn dinghy.

The weather was supposed to die down by 11 pm (which seemed like a total drag) but we went for a good hearty meal and resigned ourselves to a long night on the town. About two hours after our first attempt, the weather seemed to ease enough to make another run for it. Dena had blistered her hands rowing and twisting, covered in salt, so I (James) took the second row. After what seemed like the longest row of my life we finally made it back out to the boat and slept like the dead.

We did the round trip one more time before going in to the Harbor Masters office to ask if we could pick up a mooring. Luis, the assistant harbor master, was gracious enough to let us stay on his personal mooring for the rest of the week for free! 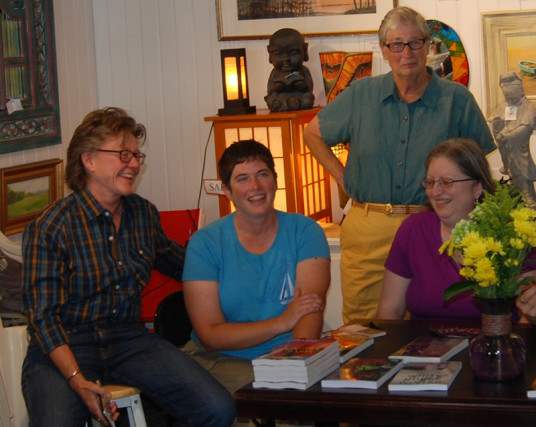 The day after Dena’s last event, we took off from P-Town with our eyes on the stiff winds and seas that were promised by our trusty virtual weather-watchers. Our weather-window didn’t seem to be very fun at all, tough for days and sticking around seemed ridiculous. The winds were forecasted to be a good 10-15 knots from the north-northeast with gusts to 20-25 knots. So we tucked two reefs in, put the sails aloft and were under way by 0700.

From the P-Town breakwater to Long Point Light at the hook of Cape Cod, it really did feel like it would be a pretty nice day on the water. Once into Cape Cod Bay, the chop kicked up to a heavy sea and built for the rest of the day. At first it was just like sailing in a washing machine. Then it turned into a Three Stooges kind of painful-not-funny, with the boat being slapped and knocked around. The waves averaged 6 to 8 feet with the occasional 12 to 14 foot growler that embedded genuine fear into the experience. And of course the wind continued to build.

…No, I didn’t get any pictures.

This went on for almost 6 hours and once again redefined the term “bad day at the office”. We kept the watches down to 1 hour each and, for the first time since sailing on the west coast of the Americas, I (James) was truly afraid to go back up on deck to take the helm. But, I did and Dena did and, once again, we made our way to the entrance to the Cape Cod Canal.

As we made our approach to the canal we caught sight of 4 big vessels coming out of the canal at the same time, two tugs with a barge and tanker of some kind. That made navigating out of the shit and into the calm of the canal just as intense as dealing with the wind and the monster seas.

After that, it was like it never happened at all. The wind disappeared behind the banks of the canal and the water was smooth glass with a gentle current that seemed to suck us right into Onset Harbor.

Everything in my body seemed to scream out in soreness. My left leg felt like it had been hit by a 2×4 just above my knee, my arms were both noodles and my back felt like I’d been carrying a boxcar for the past 40 years. Rather than drop the hook, we shagged a mooring close enough for an easy row from the Onset town dock. 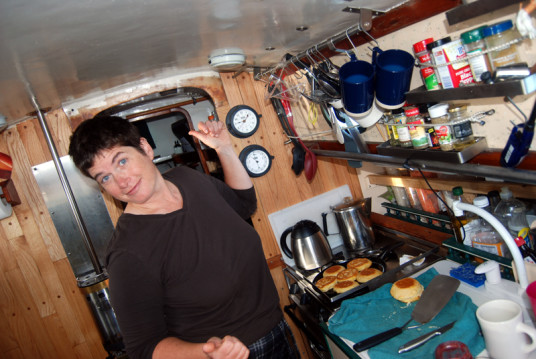 The next morning, after a hearty breakfast of grilled biscuits, butter and raspberry jam and freshly brewed, hand-ground Ethiopian Sidamo light roast coffee, we set off once again to rediscover the lovely little town of Onset, Massachusetts!