Onset, Massachusetts is a great place to shag a ball in the depths of fall.

The winds have been so mighty and fluky that we really did have to tuck back into Onset harbor for a few days to shake off the Cape Cad adventure, meaning, rest up, fuel up, provision up and fix up.

We’ve been keeping a watchful eye on our water pump for the past couple of months so we decided to stop the guessing game and just tear into in and see for ourselves if the impeller was holding the way it’s supposed to. 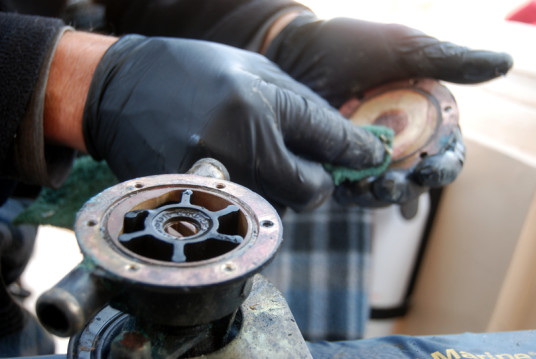 We also tuned the rig as best we could without disassembling the roller furler. One of the more nerve-wracking thoughts a sailor may fixate on is the possibility of losing the mast. Actually, that makes it sound easy. Oops, I lost my mast! Oh, I found it! But no, if the mast goes, it’s catastrophic. In the moment, high tension steel cables whip around while a large mass does something unexpected. Later…well, let’s just say there’s no more sailing.

After that we set off once again down Buzzards Bay. The day was promising 10 to 15 knots of steady westerlies increasing to gusts of 20 by the early afternoon so the decision to get underway early with the outgoing tide and freshening breeze was an easy one, and wow what a sleigh ride. The currents coming out of the canal shot us down the bay for the first third of our day’s adventure. Double reefed on the main with no jib help whatsoever and still making 7 knots but as the wind clocked around and the current slacked a bit the wind and waves were contrary enough to inspire a little engine help for the next third.

Once we rounded up on Wilbur Point heading for Fairhaven’s Aushnet River we got pounded by a beating 20 knot wind and one growler after another over the bow! 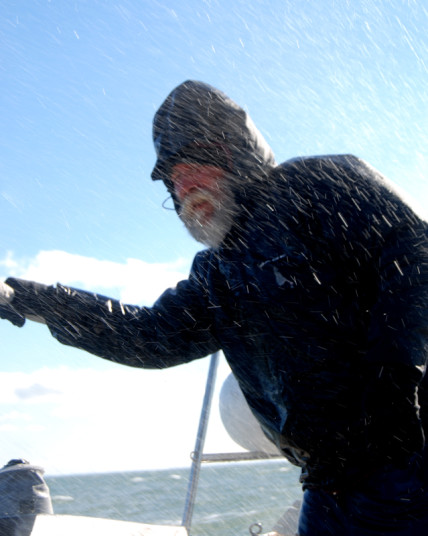 Now this is what I call a good time!

It was incredible, Dena’s watch was over just in time for me to get the only beating of the day. It only took an hour to get into land-protected waters but it was one hell-of-a-beat let me tell you! The breakers coming over the bow were set at an inconsistent beat that was more frustrating than a 5/4, but it wasn’t really that cold and it only ended up being a little over an hour so there was never that deeply profound fear that we got in the Cape Cod Bay just a few days before.

We put the hook down in about 9 feet of water with a good 7-to-1 scope of chain and just kicked back for the rest of the day.

It was cool, no worries, no hurries just a beautiful moon rise, sunset, sunrise and then on to Newport, Rhode Island to celebrate our 19 anniversary! 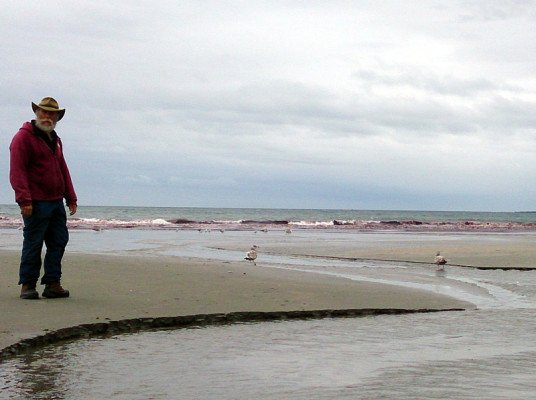 We were witness to a pretty spectacular “Red-Tide” while waiting for our hotel room (a rare event to say the least) but the light was mostly uninspiring the whole time we were there so we both just dedicated that time together as ours… It was wonderful being together, just the two of us.

We read our vows out loud and loved on each other for saying and meaning them, for still meaning them so many years later. When we met, I (Dena) was sure that promises were bunk, that turning a feeling into a duty was bunk, that even thinking about the future was bunk. Two years later, I was so strongly in love with and dedicated to James and our lives together that I realized there were promises I was willing to make. Not about how I’d feel at any given point in the future, but about how I’d proceed in the meantime. We’re good together, and much as I still think there’s no knowing the future, I know it’ll be a better one if we continue to be good together, good to each other, and good to ourselves.

Then we motor-sailed to New London. The rest of the trip to NYC will likely be a slog, so don’t be surprised if you don’t hear much for a while. Then it’s book events in the big city!