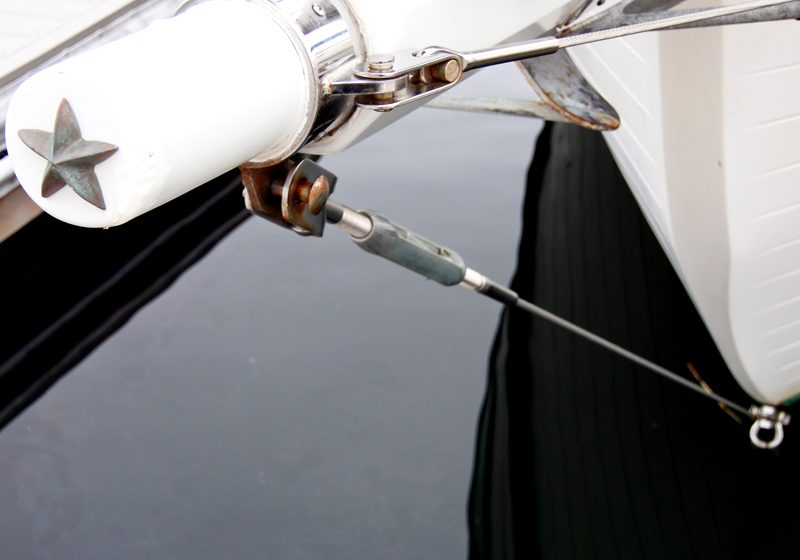 Just a few days ago, we were talking again about the fact that we enjoy being shoulder-season sailors. James’ birthday being in the middle of March and mine at the very beginning of December, we only get to sail for those occasions when we’re lucky and when we’re lucky, we’re always alone on the water.

Our anniversary, October 25th, holds more possibility but also more chance of storms. The very first anniversary we spent at sea (in 1999), we got caught in a storm. And not just the kind that terrified the newbies. We made it on television news that night for having made our way safely into Oak Harbor, WA. The cameraman loved shooting our raggedy flag and James’ rakish, exhausted exhilaration.

Then there was the time we sailed Sovereign Nation from Humboldt Bay to San Francisco Bay with 40-foot following seas that stacked up and threatened to start breaking as we swung too close around Cape Mendocino. In March, 2002.

And the snowy trip from Norfolk, VA, to Baltimore, MD, in mid-December, 2009, that scored us a meal, presents, and a pageant in Reedville because the local sailor guy was so blown away that we were traveling in that weather. And it is true that Reedville is charming when it’s frosted with light snow.

So here we are in early spring, making ready to travel most of the length of New England in order to start new jobs…during the shoulder season. It takes a certain finesse and a certain level of patience that most people just simply don’t have. You have to give yourself up to it. If the weather’s not good, you’re either going to sail in shitty weather or you’re going to be gentle with yourself and the boat so that you live that day.

But it’s a lot easier to set out confidently when the boat is shipshape and ready to go. This time, we realized that we had a lot of work to do and not a lot of time for doing it.

We added a bilge pump.

Cetacea came to us with a Garmin system that included depth, VHF and AIS, but which did not include radar for the simple reason that the PO (previous owner) had killed it. One of the constants of shoulder-season sailing is the possibility of heavy fog. Between that and the idea of doing an overnighter, radar was important to us.

Also? Fuck Garmin. That shit is irritating to use. It looks and acts more like a 6-year-old’s app than like a navigation tool, and it lacks functionality that we got used to from our Simrad system on Nomad.

The main unit wasn’t so complicated, but the radar installation required going aloft.

Now, our main halyard needs replacing. There’s a chafe spot that’s not a problem for pulling the main up, but there is no way in hell we’re going to put a human body on that thing. We used the yankee halyard for lifting ourselves and the staysail halyard for lifting other important things, such as a radar scanner dome.

Our version of a bosun’s chair is a modified mountain climbing harness. It doesn’t have as much protection on the legs; it’s not as luxurious to hang in for a very long time. What I (James) was dealing with was utilitarian. You go up, get your job done, and come back down. Any other fucking around causes you to be uncomfortable. Getting the job done quickly is essential.

Still, I was completely comfortable up there. I was sick as a dog, weak and shaky. I knew I was unable to haul Dena aloft twice in one day, so we split the work up.

The (very expensive and delicate) dome is tied with some trick bondage. A modified sheepshank plus two little black seine twine trucker hitches took that thing safely aloft and allowed me to get the bolts into it through the mount. This great big crazy convoluted trick knot (supporting a $2000 important and delicate piece of equipment) just fell apart at the plucking of a single string. It was a perfect example of Dena and I caring about the outcome for both of us.

Dena took care of me all the way from the deck up to the job. All I had to do was pull one single string and the whole thing fell away. It was perfect. Us, being a crew again. Relying on each other and coming through for each other. I didn’t believe the hole pattern would match until the bolts were in place, then I didn’t think it could be that easy to release.

One pull. I (Dena) designed that so that James could send it back down to me and then I could ease him back down to the deck. He kept trying to help, trying to take his own weight with handholds on shrouds or feet on winches, and when he reached the bottom, we were both aglow.

The idea was simple. Use the existing radar cable, which the PO just cut (!) at the deck, as a leader for the new radar cable. I went aloft with about 30′ of cabling in a coil, taped one to the other and…they parted ways partway down the mast.

Speaking of bondage, those thigh straps!

James’ inspiration was the fishing weight on seine twine. Mine was the seizing wire as a hook for drawing out the cable end once it was down there. It took patience and communication, and the diners at DiMillo’s Restaurant got quite a show, but we got the cable placed and attached.

Of course, that cable had to be run halfway through the boat, and the new GPS antenna (for directional info that allows radar overlay) didn’t come with enough cable, and the whole NMEA backbone had to be moved…but hey. It’s all good.

Meanwhile, we also had purchased 200′ of 5/16 BBB chain that needed to be integrated into our anchoring setup. We spray painted marks every 50′ and I spliced the Yale Brait on.

Now, just like all shoulder-season sailing…it’s about the weather.