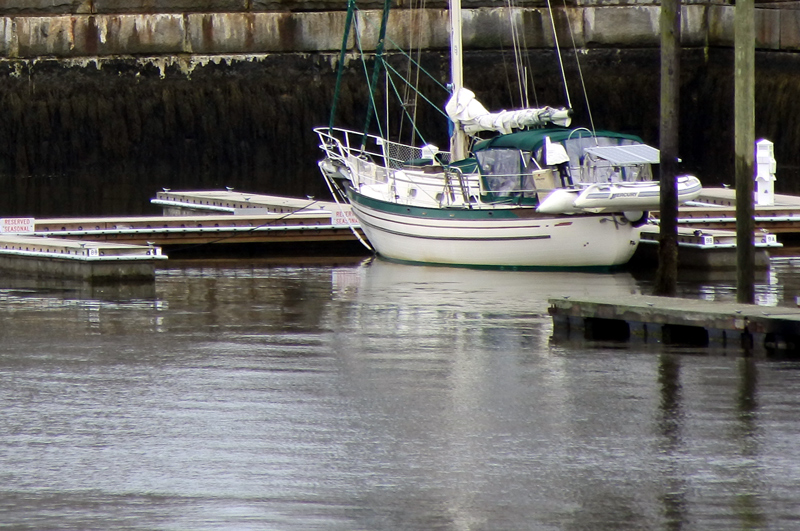 Portsmouth, NH, is more town and less rural zone than the Kittery side of the Piscataqua River. The Albacore submarine museum makes for an odd sight on the way to the city rec center (with hot tub, pool, sauna, and steam for $10 each as non-residents) and we got…

…that is doing service on the preventer now.

And it’s a good thing we had it.

We took advantage of a slack tide around 3:30pm to get off the dock. It was both the beginning of the ebb and the time of least motion. This matters in the Piscataqua, because this is what it’s like at max ebb.

The only fuel dock in the area that was open so early in the season was at a resort marina we ordinarily wouldn’t have thought of visiting. They didn’t open until 8:30am Monday morning and the ebb would have been nasty at that point, so we moved to the fuel dock Sunday afternoon instead.

I guess it’s important to note that the fog was so thick that from the time we left downtown Portsmouth all the way to the fuel dock, about 6 miles away, we had about 30 to 300 feet of visibility. There were patches of clearing where we could see almost a quarter mile away, but it went to shit completely when we turned into Little Harbor. The staggered breakwalls each had markers that we didn’t see until we were almost on them. It was a dead calm but, by the time we got those 6 miles, the ebb was raging.

That gave us plenty of helm control, which is good, but made the approach to the marina painfully slow. Once again, you never want to approach a marina faster than you want to hit it, so it was fine. We brought the boat in, landed her, and spent the night.

It was Easter, why not? Aren’t you supposed to get shit for free on Easter?

We called them when they opened to ask them to come down and dispense some fuel for us. No one asked when we’d come in, and we weren’t offering any information.

And then we took off.

The thick, forbidding fog soup wasn’t as intimidating because we had good tools. The radar painted splashes across the chart and we exited the Little Harbor channel into a rolling sea. The wind was 10-12 knots so the sailing was almost instantaneous, but the sickening motion created by bolting out of the river on a 3 knot current with a contrary wind provided a harsh reminder that meclazine is only a friend if you take it.

I (James) realized that I was starting to feel the effects of seasickness, so I went below to find the pills. I was so disoriented belowdecks that my logic patterns were shattered. I couldn’t find my way around a 30-fucking-foot boat and I was getting sicker and sicker. I came back out in the cockpit, freaking out, starting to retch, but not quite over the line.

Abovedecks, with a bit of a visual field despite the close fog, James seemed to get better and I (Dena) went down to look for the pills. As soon as I neared the hatch for the head, I realized sheepishly that I’d put the meclazine in a “safe” and “obvious” place so that this wouldn’t happen. We each took a pill.

The further we got from shore, the more assured we got in our environment. Visibility was never more than 500 yards, but the waves got less chaotic and more oceanic, and the tools continued to work. The preventer kept the main from pumping and the chartplotter/radar made us feel safe.

It stopped being nervous an hour and a half into it…but then it started to stack up again. Rain dripped from the zippers of the cockpit cover and splashed the seats, but we didn’t get the drenching we would have had without it.

We were approaching Cape Ann with the big sets from the port quarter tossing everything around. We know exactly, now, where we need to focus on stowage. The baking dishes came right out of the oven; an A&W mug that’s been with us a shockingly long time shattered when it came loose and slid into the sink (which did a fabulous job of containing the explosion of glass).

At the same time, the boat was completely in our control. We were out of our comfort zone using a wheel, but we locked down the wheel brake and kept the sails trimmed just right and she sailed! We were doing 5-5.5 knots with 2 reefs in a shitty main, but both the yankee and staysail out and the rain sweeping past and slowing, building again and slowing.

The predictability of the waves degraded as the wind built and both air and water compressed around the landmass that is Cape Ann. We had just enough room to make it safely around the rocks strewn like mines. Just outside the limits of our foggy visibility, crashing kept us well aware that the chart was correct and land was very nearby.

We have put in a lot of hours sailing, motorsailing, and motoring using either a tiller pilot or a Monitor windvane on the last boat. We didn’t do a lot of driving – she drove herself. This is not how we’re operating Cetacea at this point, though we own and will be installing both of those options. Hand-steering for hours brought reminders of Sovereign Nation and the hardships we knew on the way down the coast in the Pacific Ocean, taking four hour shifts because it was…what? Traditional? Fuck that – an hour at a time works great.

As we rounded the Cape, we had a couple of AIS returns and a handful more radar returns. Laconic VHF radio chatter about the weather made it less than surprising when fishing boat after fishing boat flew past us. I’m talking the big ones–the professionals with outriggers spread for stabilization and all their lights illuminating the gloom. One of the big ones lined up behind us for a while, then came around us on the inside (which kept us from feeling squeezed into a narrow safe zone) and led the way around the breakwall and through the entrance buoys.

That bar proved tougher going for us than for them and we had to strike all sail to motor directly into the wind for part of it. We moved at a snail’s crawl, but managed to stay out of the way of the hordes. One boat passed us going out and then again heading back. It wasn’t worth it, even to the hungrier pros.

This was a Gloucester storm that we were about to anchor in. The fishing boats picked up moorings that seemed random, but we found a bit of lee and anchored. The rain paused so that James was on the bow in mist rather than downpour and we used 150′ of our nearly brand-new chain. Our second time anchoring with the new rig, and the peace and comfort of being safe wiped out the energy that the trip hadn’t.

We both agree–that’s shook down.