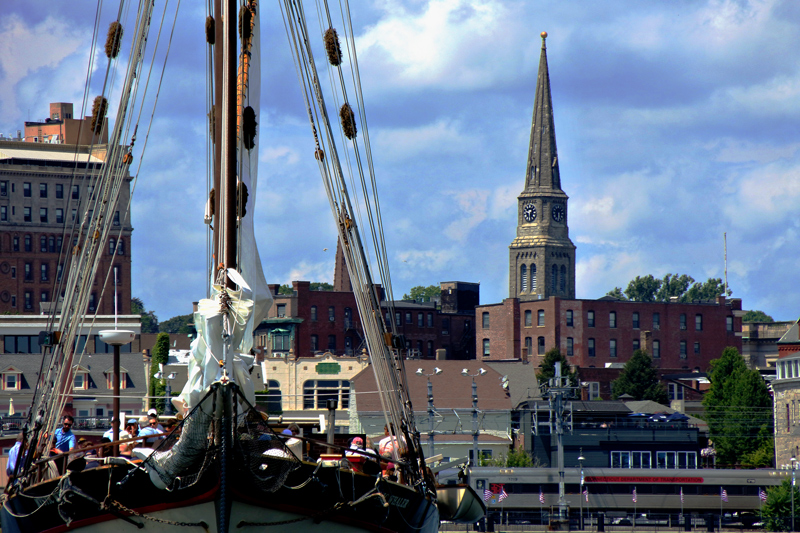 Dena got back from Oklahoma on Sunday, and we went to work on Monday and Tuesday. We woke up on Wednesday and went for a nice long bike ride into East Hampton. On the way there I (James) snapped.

We stopped right in front of the “totally awesome” fruit stand, home of the $23 buck 2 oz salad, and I just yelled, “We have to get out of this fucking place!”

James had no idea of what I (Dena) had been thinking, but it was pretty much exactly that. After 10 days with my mom in ICU, after taking turns with Gary sleeping in a chair right beside the bed because she got so upset when she couldn’t wake us from the couch 5 feet away, after the ignominy that is modern air travel…coming back to Three Mile Harbor just to hate our jobs 20 hours a day? No.

Dena pulled up next to me (James) and made the reality of what I’d just said stick. “To make that work, we’re not going to see Tarantino’s new picture. We’re going on a provisioning run/bike drop with an Ub return back to the dinghy. Then we ready the boat and sail away from all, um, this?”

I (Dena) didn’t mean to make it sound like a question, but this is as quickly as we’ve ever even considered bouncing out of a situation.

…And that took all day, because it also included gathering all of our uniform shirts, hoodies, and fleeces, adding keys to the bags, and dropping the whole mess at the shop at Three Mile Harbor Marina. Back at the dinghy, we stripped “our” slip, which we had despised, of lines, electrical cable, water hose.

We woke up the next morning like we’d been underway the whole time we’d been in the Hamptons. The boat ship shape, the sail cover off, and the anchor ball struck, we were underway!

The engine started right up without a sputter but I (James) figured out pretty quick that there was no cooling water coming out of the exhaust. In hopes that it was a brief clog I let it run for a few moments before shutting the (evilmotherfuckingpieceofshit) engine down.

Less than an hour after quitting by email, and now no resources that won’t be…

Start from the beginning…water flow to the water pump? Nope…

…yes, I (James) put my lips to that naz-hose and blew. It bubbled up outside the boat and started to flow back in. I put it back together, Dena started the engine up…Nothing!

So there are these things, these…polyps? Free-floating amniotic sacs? Regardless of what they are, they grow madly in Three Mile Harbor. The realization struck that the hose to pump connection wasn’t actually the beginning of the water-flow puzzle.

I (Dena) went swimming. The intake was completely covered in about 2 and a half months of crazy 3 Mile Harbor ecology. It tore right loose and I stayed in the water while James started the engine. As I realized that there was suction at the seacock, a very healthy and powerful exhaust water output spewed from the stern and we both cheered.

Cetacea was a little sluggish rolling out of 3 Mile Harbor but once we got all yards aloft she spoke right up and carried us quite nicely on a steadily freshening Long Island breeze.

Being miserable is an unacceptable state of mind. When we were alone together at anchor in 3 Mile Harbor we were absolutely in our element. For two months while at anchor it was somehow enough to counteract the meaninglessness of the work that I (James) was doing on a daily basis. Then when Dena was in Oklahoma doing truly meaningful work and I was stuck in the Hamptons doing this bullshit vanity crap, not even coming back to the boat in the evening and experiencing one breathtaking sunset after another, was enough to make me want to stay.

…Time to be underway.